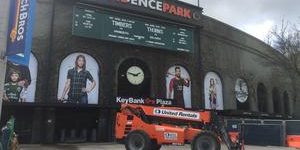 By Matthew Kish – Staff Reporter, Portland Business Journal
Nov 9, 2016, 1:15pm PST Updated a year ago
Nike Inc. on Wednesday gave a sneak peak at a SoHo store that will serve as a template for future retail locations and possibly play a key role in the company’s push to $50 billion in sales.
« We see the store as our global debut of the future store, » said Heidi O’Neill, president of Global Direct to Consumer. « We see SoHo as just the start. It’s an amazing start. »
The five-story, 50,000-square-foot store includes interactive features and emphasizes personalized service, such as gait analysis. It also includes the largest dual-gender wall of Nike Sportswear footwear worldwide.
Customers will be able to try out products at the store, including on a basketball court or treadmill.
« We look at this as the most personalized store we’ve ever opened, » O’Neill said. « The level of experiences are incredible and they’re also super personalized. »
Some of the innovations at the store were developed in Nike’s Retail Experience Center in Portland’s Pearl District.
Nike plans to open a similar store in Miami in mid-December. Then it’ll roll out new features in existing stores.
« We’re going to be very strategic about the right time and place, » O’Neill said.
The store formally opens Friday at 10 a.m. For the next two days Nike will host events for local media, influencers, athletes and select consumers.
At an investor day last year, Nike announced a $50 billion sales goal. As part of that goal, it wants to increase direct sales 142 percent to $16 billion between fiscal 2015 and fiscal 2020.